Cabo catoche is 15 miles from the island of Holbox, on this tour you can perform various activities such as bottom fishing, snorkeling, bird watching, walk on the beach and mangroves..

Cabo Catoche was the landing site of the first European settlers intentional in the current mass of the Mexican territory, during the expedition of Francisco Hernandez de Cordoba in early March 1517 and officially marking the date of discovery of Yucatan by Spanish.

There is no consensus on that point first touched the Yucatan Peninsula. Some authors claim that was Isla Mujeres, while others, including Bernal Diaz del Castillo, who was part of the expedition, Cabo Catoche listed as the point of first contact.

Later Spanish historians agree that the first population was Ekab or Ecab sighted, which attracted much attention, as it was much bigger to those who knew of the Spanish and Cuba. There, his ships stopped when he realized that the natives in canoes approached and invited to disembark.

Bernal Diaz del Castillo, narrated in his History of the Conquest of New Spain that looked at how they approached the locals, looking happy and peace signs, invited the Spanish to the coast, saying "cones Cotoch" , "Cotoch cones" which means "walk here at my house" For this reason they put that land Catoche tip, Cabo Catoche today.

The cacique or "Halach Uinik" of Ekab offered to return the next day with more canoes to help the landing of the Spanish. The next morning, the Maya came back to the boats, but Hernández de Córdoba preferred landing with their own boats.

The people they had been invited to visit very near Cabo Catoche, which was Ekab Diaz del Castillo named "El Gran Cairo" by the constructions made important stones that could see. When approaching this population were ambushed by the Maya. 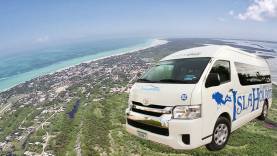